Getting involved with BRDG, I tried to discover the significance of the place, but what I achieved was a constructed history with a few known historical facts that are connected by fictional presumptions. This passage is an irrelevant place within the city, even though it is used by many inhabitants as a shortcut or a connection between the two sides of the city that once was cut by the railway.

I decided to focus on its formal aspect, observing this location as a performative space for passers-by whose movement is directed by its shape and position within the city. In order to emphasize this I am introducing another formal element, a geometric object that resembles an architectural element. The object will move around the passage during the course of the exhibition, trying to influence the movement of passers-by and their perception of the space they are familiar with. 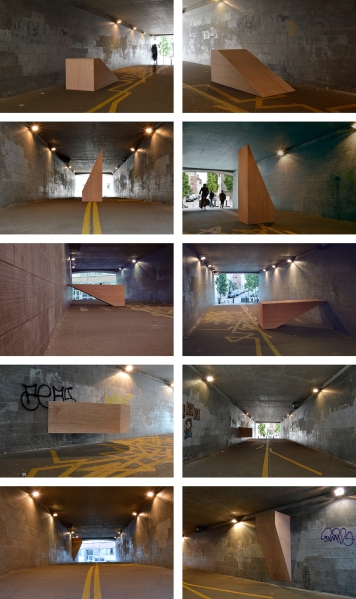