In the period between 1973 and 1988 Pešter, a karst plateau in southwestern Serbia (at that time Yugoslavia), was intensely reforested (over 150,000 hectares). It was realized through state-organized voluntary labor done by ORA (acronym for Youth Work Actions). The reforestation was driven by ideology (to promote the idea of brotherhood and unity) rather than by economy (the costs were probably higher than the economic value of the wood). The final effect was in the end a creation of anthropogenic forests. Today, after almost 30 years, these forests are a representation of the commons and the potential of it that does not have the immediate visibility, but a long term effect.

The anthropogenic forests always had a very precise form, that was based on a scientific research, but always open for an improvement and experiment. That also means that at the moment of the creation, there was a strong idea of the authorship, that would become irrelevant after certain period of time (when different events start influencing its shape).

“Constructed Landscape” is an open-ended work. At this moment it is a collage of archive photos made by my father who was the leading project engineer of the reforestation at Pešter, furthermore a video that is trying to look at that anthropogenic forest as it would be a sculpture searching for traces that uncover its origin, profiles of trees that define the timeframe between the moment of reforestation and today and the model of a possible forest that could be constructed in the future. 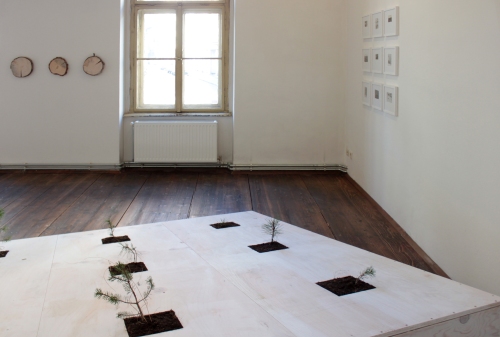